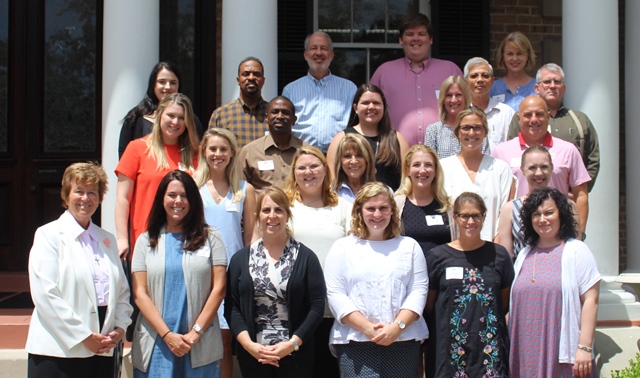 The Academy of the Sacred Heart is pleased to welcome new faculty and staff members for the 2018-2019 school year, as we continue to grow and educate tomorrow's leaders.

Peggy Armstrong – Mathematics (7th-8th Grade), Academic Games
Peggy Armstrong is a graduate of Tulane University, Newcomb College, and comes to Sacred Heart with 18 years of teaching experience at St. George’s Episcopal School. In addition to teaching at numerous grade levels, Mrs. Armstrong developed the Schoolwide Enrichment Model and Academic Games program, and she coached a very successful Math Olympiad team. She has been married for thirty years to her husband, Steve, and has two grown children. Her daughter, Katey, attended the Rosary for fourteen years and graduated with distinction.

Emily Bates - Prekindergarten
Originally from Tennessee, Emily Bates recently relocated to New Orleans when her husband accepted a job at Tulane University. Mrs. Bates graduated from the University of Alabama with a degree in elementary education in 2016. She then worked two years in the non-profit realm in North and South Carolina. She has always had a desire to use her life to benefit others, whether it be by providing education, social services, or humanitarian aid, she considers it an enormous blessing to have found the Academy of the Sacred Heart.

Ned Benjamin – Science (7th Grade)
Ned Benjamin has an undergraduate degree from Duke University and a Master of Science in Teaching from Loyola University New Orleans. He is a Louisiana Class A certified science teacher who has taught middle school life science at local ISAS schools for the last 25 years. He is married and has four children, and he enjoys soccer, chess, being outdoors, and being with friends.

Ricky Bordelon – Civics, Psychology, AP Government (Upper School)
Ricky Bordelon, a native New Orleanian and graduate of Jesuit High School, earned a Bachelor of Arts in history and political science from Fordham University in New York City after which he won a Fulbright fellowship to teach English at a secondary school in Bamberg, Germany. Following his year in Germany, he earned a Master of Arts in German and European studies from Georgetown University’s Walsh School of Foreign Service. Before coming to Sacred Heart, he worked in historical research and public history, including at The National World War II Museum. In his spare time, he enjoys theater and playing orchestral percussion; he also speaks German and Russian.

Greg Caro – Fitness and Wellness Coordinator (Upper School)
Greg Caro has served Sacred Heart for 26 years as a part-time coach. During his coaching tenure, he has amassed an incredible 12 state championship titles in three different sports (cross country, indoor track & field, outdoor track & field). He has also coached basketball, softball, and golf for the Cardinals. Coach Caro will rely on his fitness experience, passion for mentoring, and a deep understanding of the Five Goals of Sacred Heart to promote wellness in students, athletes, and faculty.

Kim Dorner – Kindergarten Co-Teacher
Kim Dorner earned a Bachelor of Science in education while playing golf on a scholarship at Texas A&M University. She has worked with girls in prekindergarten through second grade for the past eight years at Ursuline Academy. She enjoys seeing the smiles on the girls’ faces as they learn and grow throughout the school year. Mrs. Dorner has a daughter who is currently in the Accelerated Master’s in Nursing Pathway (AMNP) program at the University of Alabama at Birmingham and a daughter who is in her second year at Louisiana State University in accounting.

Elizabeth Ellinghausen – Little Hearts 1- & 2-Year-Old Co-Teacher
Elizabeth Ellinghausen graduated from the Rosary in 2013 and earned a Bachelor of Science in psychology with a minor in vocal performance from Louisiana State University. She spent the last year working for Walt Disney World in guest experiences.

Elizabeth Granzow – Part-Time Librarian (Mater Campus)
Elizabeth Granzow attended the University of California, Berkeley, where she received a Bachelor of Arts in theatre and performance studies. She has an additional degree in drama and is currently working on a degree in speech pathology. Ms. Granzow’s extensive and varied background includes work in The New Orleans Public Library as a Program Coordinator, Community Organizer, Researcher, and Storyteller. In addition, she has worked with the Country Day Creative Arts Program and the LSU Early Reading First Project Recovery Program. Ms. Granzow’s philosophy stems from her belief that children are growing members of our community who deserve respect, fairness, and fun.

Abigail Griffin – Development Services Coordinator
Abby Griffin recently moved to New Orleans after spending the past year in Houston, TX, serving at Cristo Rey Jesuit with the Jesuit Volunteer Corps. Originally from New York, Ms. Griffin comes to Sacred Heart with a degree in English and Chinese from College of the Holy Cross. In addition to her role on the Institutional Advancement team as Development Services Coordinator, she will be working with Little Hearts for Mandarin language and cultural immersion.

Patricia Morrow – Preschool & Lower School Administrative Assistant
Patricia Morrow is a graduate of the University of New Orleans with a Bachelor of Science in business administration and has educational work experience at both Patrick F. Taylor Science & Technology Academy and Tulane University. Mrs. Morrow is fluent in Spanish and has lived in both Spain and the Middle East during her formative years. She and her husband are proud parents to Gavin, a sophomore at the University of Michigan, and Lauren, a senior at Haynes Academy School for Advanced Studies. In her spare time, Mrs. Morrow enjoys attending concerts, watching movies, cooking, and games.

Mathilde Mulkin – Little Hearts 3- & 4-Year-Old Co-Teacher
Mathilde Mulkin’s earned a Bachelor of Arts in liberal arts from the University of Mississippi. After working as an event planner, she realized that teaching young children is where her heart lies. Ms. Mulkin’s family has deep roots at Sacred Heart.

Emily Olmsted – Development Services Coordinator
Originally from Virginia, Emily Olmsted is a recent graduate from Tulane University, where she double majored in marketing and management. In addition to her studies, Ms. Olmsted was extremely involved in Tulane's first-year seminar program, working as a student intern and peer mentor for first-year students. Over the past four years, she has fallen in love with New Orleans and the unique opportunities the city offers.

Lizzy Oxler – English III: American Literature, World History (Upper School)
Lizzy Oxler comes to Sacred Heart after working on her Ph.D. in English and folklore at the University of Louisiana at Lafayette. Her research focuses on the intersections of visual art and literature in the South and the West and on the role of women in these disciplines. Before UL, Ms. Oxler received a Bachelor of Arts in political science and community health from Tufts University and a Master of Arts in literature from the Middlebury Breadloaf School of English. Ms. Oxler has worked in various independent schools in the Northeast, where she helped implement global studies curriculums, coached field hockey and lacrosse, as well as worked on developing interdisciplinary writing curriculums.

Michael Thaibinh – Algebra I (8th Grade), Innovation Lab
Michael Thaibinh is a graduate of Loyola University New Orleans with an undergraduate degree in philosophy and a minor in math. He holds a Master of Architecture from Texas A&M University. Mr. Thaibinh taught algebra at Jesuit High School in New Orleans and worked in healthcare design in architectural firms in Raleigh, NC, and Columbus, OH. He also served as a design engineer in a power industry company in Houston, TX. For ten years, Mr. Thaibinh, his wife, and three children lived in Northern Thailand where they founded Wildflower Home, a shelter for single mothers in crisis, especially refugees, hill tribe women and children, and victims of human trafficking.

Maddie Trauth – Little Hearts 3- & 4-Year-Old Co-Teacher
Maddie Trauth earned a Bachelor of Arts in communication disorders from Louisiana State University. She has worked in Sacred Heart’s PLUS program for the past year and is looking forward to bringing her speech/language experience into the Little Hearts 3/4’s classroom.

Caroline Wade – Little Hearts 2- & 3-Year-Old Co-Teacher
Caroline Wade is a graduate of Louise S. McGehee School and the University of Alabama. She brings ten years of experience in early childhood education. When she is not teaching, Ms. Wade enjoys sailing, cooking, and spending quality time with friends and family.

Lori Wynne – Social Studies & Religion (8th Grade)
Lori Wynne holds a Bachelor of Arts with a minor in history from Louisiana State University and participated in the Teaching American History grant program at Loyola University New Orleans. She has ten years of experience teaching middle school social studies in the Archdiocese of New Orleans. Mrs. Wynne is married and has a son who attends Trinity Episcopal School.