Academy of the Sacred Heart has undergone an extensive renovation to its assembly hall and library, modernizing both and adding an art gallery, innovation lab and makerspace.

Renovated by Blitch Knevel Architects, the Uptown all-girls school that was built in the 1900s has been brought into the 21st century with new lighting and innovative new features.

Ron Blitch, president of Blitch Knevel Architects, said the iconic building at 4521 St. Charles Ave. includes an assembly hall that was renovated 25 years ago but needed a refresher with sophisticated lighting and technology upgrades. The room can seat 300 people in multi-colored chairs.

The transformed assembly hall, completed in September 2017, doubles as an art gallery. They were able to redo the original floors with a hard pine finish.

The other major space that was part of the overall renovation was the library that also had been renovated over two decades prior to the new facelift.

“With digital technology, libraries are changing,” Blitch said. “They are still places of study and discernment, but they are much more about collaboration and quiet study than taking books off the shelf.”

The concept was to create spaces for the students to use laptops and other technology. It includes bright colors and graphics to celebrate the school’s colors of red and white, as well as the interlocked heart logo.

Next to the 16,000-volume-capacity library, the developers have installed an innovation lab, which is a makerspace where students can gather to work on projects. Blitch said it was an existing empty space that now encourages design-thought and fabrication-related ideas. There are white boards around the room to promote planning and discussion. There are also 3-D printers and equipment that students can use to build hands-on projects. New LED lighting was installed that can be controlled with dimmers and compliments modern fixtures, he said.

A wall has been built to separate the innovation lab and the library to contain noise and dust. The architects found window frames stored in the attic and were able to incorporate them into the wall’s design.

“That was an interesting facet of re-using old pieces of the old campus in a new, contemporary function,” Blitch said.

In addition to completing construction while the students were away for summer break, Blitch said the building’s age also presented its own challenges.

In a building that is 120 years old, Blitch said there were some surprises that come with the territory of renovating a historic building. Contractors faced some plumbing deterioration and water damage in boards, but nothing out of the ordinary, Blitch said.

During the renovation, Blitch said they found girls’ initials etched into the beams that had been there for decades in the attic. They were also able to expose some brick walls from the original building that had been covered in the previous renovation and incorporate them into the new design. 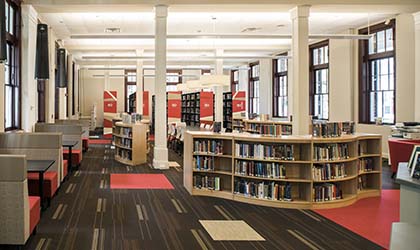